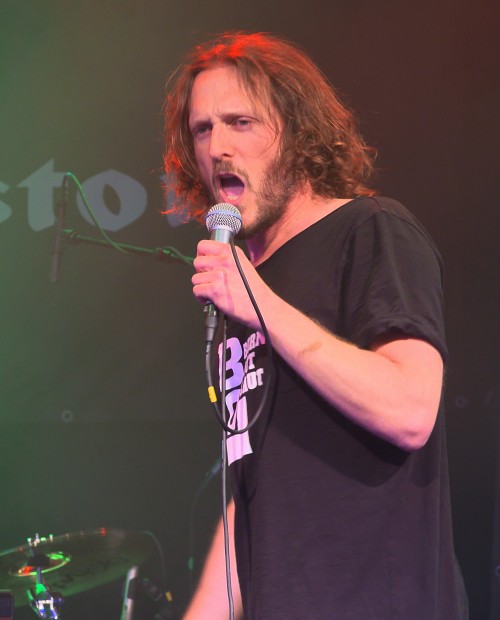 The singer of the band, a native of Belgium, finally sticks to his love for music at the age of 36.

After having a burnout he stops working as a television cameraman. He quickly realizes that he has the chance of his life. He has the possibility to opt for only making music. Still he needs a year to stop being enmeshed in projects and chains of thoughts. Then he focuses only on music.

Together with his friend Tom Plück, Sean starts to compose songs. Because of his willing to be understood and his love for the german language, he writes german lyrics. The feeling to be trapped for such a long time in the wrong job, forces him to write down 100% of his own self on paper and into the songs.

The more music comes into existence and the more successful Burn Out Laut becomes, the more peaceful Sean gets. He feels like he arrives where he belongs.

Over many years Sean didn’t bother about music at all. A negative belief system made it impossible for him to imagine working as a musician. For a very long time he didn’t dare to follow his heart desire.

Nevertheless, there are some musical role models. He always fancied voices, that scream the souls out of their body, as those from Joe Cocker, Janis Joplin and James Brown. As a teeny he liked to listen to Led Zeppelin, Nirwana, Metallica and Michael Jackson. He really likes Motown music.
His german favourite album is “Stark wie zwei” from Udo Lindenberg. Sean is touched by the simplicity and beauty of the pictures in the lyrics. He loves the mixture of serious an cheerful topics, embedded in awesome music.

For him, composing is a necessity such as eating, drinking and even breathing. While writing, the words and melodies splutter unfiltered out of his being on the paper. Exceptional melodic arches and pictures made out of poetic words are the result of his passionate work.

With the help of his edgy clear voice Sean manages to transfer his emotional world directly to the audience. Fans are touched by his performance.

More and more Sean becomes the musician and the person he wants to be. He is very excited to rock all the musical stages in the world.