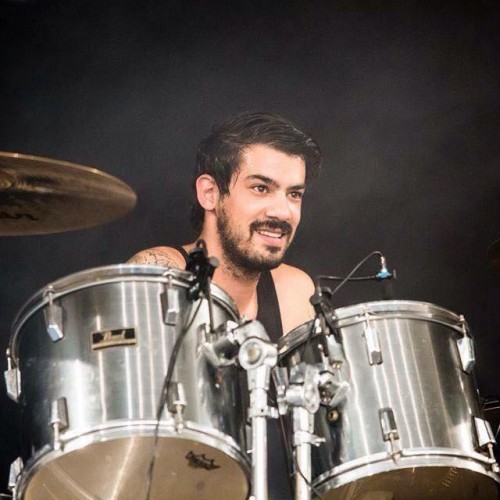 In an early stage of his life he discovered his passion for the drums. At the age of 5 he got his first drum lessons. Three years later he played in several bands of the Bergisch Gladbach creative school. Parallel to that he learned to play the piano and about music theory.

His first musical role model was Steve Smith, whom he admired at the “Leverkusener Jazz Tage”, when he was only 4 years old. From this moment on he already knew that he wants to become a drummer.

Since the age of 17 he works as a professional drummer.

For private reasons Mirko moved to Bucharest in Romania and got connected to the musical scene in this awesome city. For 12 years he toured with bands and solo artists. Here are some of them:
Cortez Band, Lefters, The Rock (the only AC/DC cover band, that has an official licence from AC/DC, Mad Monkeyz, Delia, Ami, Adrian Sina, Mihai Chitu (Winner of The Voice of Romania) und Dave Evans (founding member of AC/DC).

Besides all of that he played regularly for studio productions and for the romanian radio and TV. At the same time the hard rock cafes all over the world became his second living room.

After all of these years on tour Mirko’s body suffered and collapsed. Giving concerts all over the world, he didn’t only travel from country to country, he also travelled from jetlag to jetlag. He got problems because of high blood pressure and several times he fainted while playing in front of huge audiences. The last time that happened, he woke up in hospital. He then decided to change his way of living radically. Together with his girlfriend he moved to his home town Cologne, nearby to his parents and sister, to take it easy.

After three months of recovering he works as a drum teacher and starts to look for a new band to play in. In february 2019 he gets to know the band “Burn Out Laut” that he gives his drumbeat to since then.

After only two and half weeks of rehearsing he joins the band into the studio to record six songs for their first EP.

Mirko lives on the east side of Cologne.